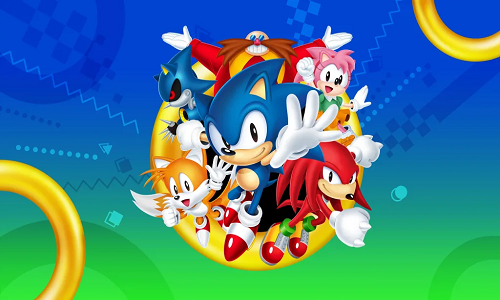 Sonic Origins[b] is a 2022 Sonic the Hedgehog video game compilation by Sega. It features remasters of the first four platform games in the Sonic series originally released for the Sega Genesis and the Sega CD: Sonic the Hedgehog (1991), Sonic the Hedgehog 2 (1992), Sonic CD (1993), and Sonic the Hedgehog 3 & Knuckles (1994). The games are playable in their original format and a new widescreen format that removes lives. Origins adds additional game modes and missions, which allow players to unlock content in an in-game museum. Origins was conceived following the release of the 2020 Sonic film; due to the influx of new fans, Sonic Team head Takashi Iizuka wanted to make the older Sonic games available on modern hardware. It was primarily developed at Sega, though Simon Thomley, who worked on Sonic Mania (2017), developed the remaster of Sonic 3 & Knuckles. A portion of the Sonic 3 soundtrack was replaced with rearrangements by Jun Senoue, following speculation of licensing problems arising from Michael Jackson's involvement with Sonic 3. Origins was released for the Nintendo Switch, PlayStation 4, PlayStation 5, Windows, Xbox One and Xbox Series X/S on June 23, 2022, the series' 31st anniversary. It received generally favorable reviews; critics praised the enhancements and presentation, but criticized the downloadable content, replaced music in Sonic 3, and lack of features.