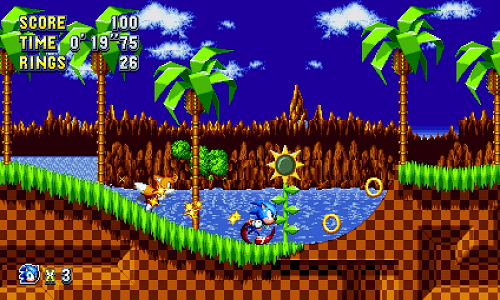 Sonic Mania is a 2017 platform game published by Sega for Nintendo Switch, PlayStation 4, Xbox One, and Windows. On 2022 The mobile edition come out. Produced in commemoration of the Sonic the Hedgehog series' 25th anniversary, Sonic Mania pays homage to the original Sega Genesis Sonic games, featuring speedy side-scrolling gameplay. It takes place over 12 levels, including several redesigned from past games. The story follows Sonic, Tails and Knuckles as they venture to defeat their nemesis Doctor Eggman and his robotic henchmen, the Hard-Boiled Heavies.
The development team was composed of members known for their work in the Sonic fangame and ROM hacking community. Development began after lead developer, director and programmer Christian "Taxman" Whitehead, who was previously contracted by Sega to develop enhanced mobile ports of Genesis Sonic games, presented a playable prototype to Sonic Team producer Takashi Iizuka. Art, level design, audio, and additional programming was provided by independent studios PagodaWest Games and Headcannon. The team used Whitehead's Retro Engine and aimed for a graphical quality between Genesis and Sega Saturn games.
Sonic Mania was released in August 2017 and became the highest-rated Sonic game in fifteen years. Many reviewers saw it as a return to form for the Sonic series following a number of poorly received games released after the 1990s. Its presentation, level design, music, and faithfulness to the early Sonic games were praised, but its lack of originality was criticized. Several described it as one of the best Sonic games and one of the best games of 2017. Within a year, it had sold over one million copies worldwide. Sonic Mania Plus, an enhanced version with additional content, was released in July 2018.