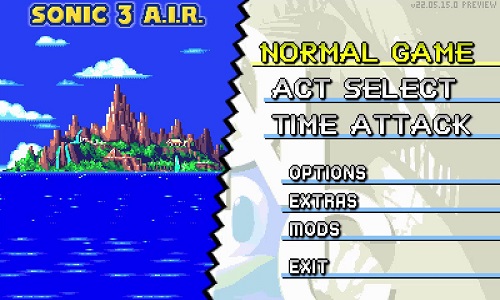 Sonic 3: Angel Island Revisited (Sonic 3 A.I.R.) is a fangame by Eukaryot which aims to be an enhanced port of Sonic the Hedgehog 3 & Knuckles. The fangame includes features such as 16:9 widescreen support, constant 60 fps gameplay, a new time attack mode, as well as various bug fixes and minor gameplay tweaks. Sonic 3: A.I.R. requires a ROM of Sonic 3 & Knuckles in order to run, however, as the project doesn't involve piracy, the officially recommended source is the Steam version of Sonic 3 & Knuckles (which is automatically detected by A.I.R.), but any ROM will work as long as it's the same revision.
The most noticeable change from S3&K is that the game now runs in widescreen (400x224 pixels, to be exact). A number of optional graphical changes can be toggled in the options menu. These include screen filters (sharp, soft, or xBRZ), a background blur effect, 360° character rotations, and an afterimages effect for Speed Shoes. The Special Stages have been completely overhauled. The slowdown has been all but eliminated, now running at a constant 60 fps. The stages now feature a smooth horizon line and anisotropic filtering inside the checkerboard. Additionally, the player can choose whether they want the ring counter to count up or down in the options menu.