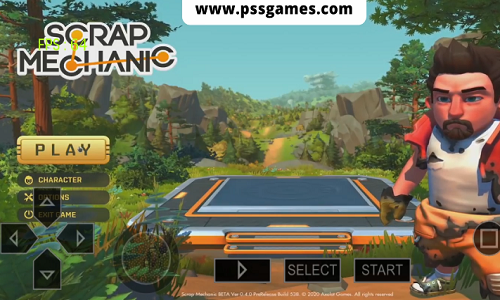 Players begin at the site of a crashed spaceship, with very few items. They must search for supplies and food in order to survive. The spaceship has a basic crafting station called a Craftbot with limited functionality, primarily focused on allowing players to build a simple automobile to begin exploring the world. The second major location in the game is the mechanic station, where most complex crafting can be undertaken with the other crafting stations: the large Craftbot; the Dressbot, for making clothes; the Refinebot, for refining raw materials; and the Cookbot, for combining raw foods into recipes. The cheapest item is the Resource Collector used for collecting resources and transmitting them to refiners. Other locations include ruined structures like the Silo District or Ruin City filled with enemy robots, supply crates, and chests with loot; the Trader's Outpost or Hideout, where items can be purchased with Produce Crates and Caged Farmers; the Roadside Markets that can be harvested for blocks, parts and other resources; and warehouses, large buildings storing more advanced supplies filled with Tapebots guarding the warehouse with their clippers and tape guns. The world is inhabited by a variety of robots that attack the players on sight. These include: spider-like Totebots, which are the most basic of them all and whose heads can be used to make alarms, music and deter other bots. Their original purpose is unknown, thought likely to herd cattle; Haybots are, most likely, the second enemy you will enounter in the world. They wield a pitchfork and drop scrap metal rods (which can be refined into blocks for crafting and building). Were originally used to manage the wheat fields and stack hay. They have a weakness in form of water, which can be used against them: they never go swim, and get stunned if you water them with a bucket; Tapebots, who guard warehouses and shoot tape rolls (At higher floors they use firecracker rolls instead, which are explosive) at intruders. They are also the most dangerous bots. Those were originally used to do packaging jobs at said warehouses; and the large Farmbots, that wield a pesticide gun and a large scythe. They also hold the key to the warehouses. Were originally used to automatically do majority of the farming jobs. In Devblog 20 and 21 new bots have been shown, those being: Red Totebots (referred to by the developers as Red Guys), they are confirmed to use explosives but the way they will work is yet to be announced; Cable Cutter Bots, they will be found in groups in the caves coming in Chapter 2; and the Trashbot, according to the developers, the first boss of scrap mechanic, it will be found on the roof of the warehouses