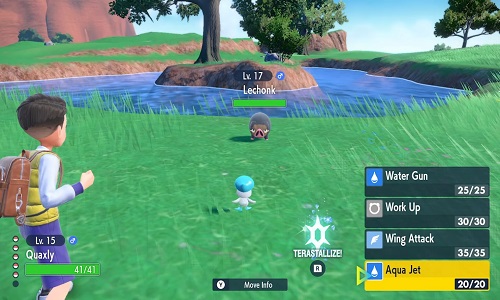 Pokémon Scarlet and Violet largely follow the same basic gameplay structure of previous Pokémon games, where players obtain creatures known as Pokémon, primarily through catching and trading, and use them to explore the world and battle other Pokémon trainers.
Scarlet and Violet are set to have open worlds which include both urban areas and open wilderness without borders between the two, unlike previous installments in the Pokémon series.[3][4] In addition to this, progression through the games will be up to the players, with three routes available to choose from: Path of Legends, Victory Road and Starfall Street. Each route will cover a different storyline.
The games introduce three new starter Pokémon: Sprigatito, Fuecoco, and Quaxly;[4][6] and two new legendary Pokémon: Koraidon and Miraidon. To assist in travel, Koraidon, Miraidon, and the Pokémon, Cyclizar, can be used to traverse the environment. A mechanic called "Let's Go" will allow the player to send out a Pokémon to roam the overworld and automatically battle wild Pokémon. In addition, co-op play with up to three other players is included.
Scarlet and Violet introduce the Terastal phenomenon, which gives Pokémon a crystalline appearance, as well as changing a Pokémon's type to match that Pokémon's "Tera Type", as well as unlocking special moves such as Tera Blast, which, when used by a Terastallized Pokémon, becomes a move of the same type as the Pokémon’s Tera Type