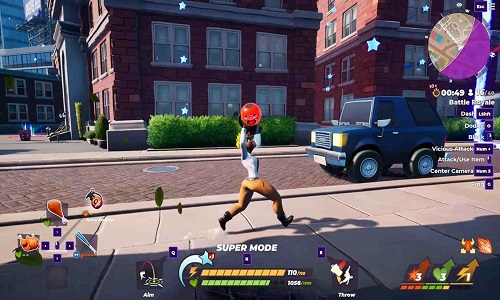 Rumbleverse is a battle royale game played from a third-person perspective. 40 players will be dropped into Grapital City and they must fight against each other with the goal of being the last survivor. Unlike similar games in the market, Rumbleverse focuses on melee combat, and players have no access to any gun or firearm. Players have several base attack, including punches, kicks, and elbow drops. Basic attacks can be blocked, while stronger attacks are unblockable and must be dodged instead. At the beginning of a match, players must explore the city and collect magazines hidden inside boxes that can teach players special moves and takedowns, as well as potions that increase the player's stats such as health, stamina and strength. Only a maximum of 10 potions can be used in a match. Melee weapons, such as baseball bats and chairs, can be picked up and used as weapons against other opponents. Every building in the game is climbable, allowing players to quickly navigate the city or reach strategic positions. Similar to other battle royale games, players must stay within a shrinking circle. When the player is outside the circle, a timer will begin counting down from 10. Players will be disqualified once the timer reaches zero. Iron Galaxy estimated that each match will last around 12-15 minutes. Rumbleverse utilizes a battle pass model. As players complete matches and progress in the game, they will earn Fan Mail, an in-game currency which can be used to purchase cosmetic items and outfits for their player avatar. Individual pieces of clothings can also be bought with Fan Mail. Players can also purchase Brawlla Bills, another type of currency which can be purchased through microtransactions.