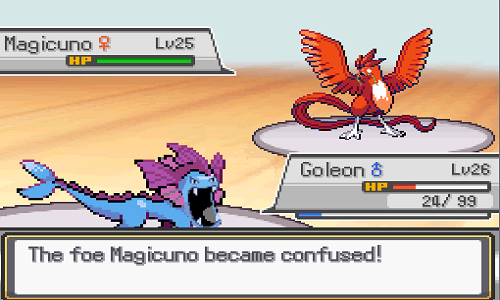 The game takes you to Kanto again which by now I even know better than the layout of my 20m² apartment. It mostly follows the original story of Red’s journey to become a Pokémon champion, however since this is an RPG-Maker game and NOT a Romhack there are quite a few twists and turns in both the story and the very way the game plays, because in this game you combine Pokémon into a “new” Pokémon. These Pokémon consist out of a head part, which takes 2/3 ‘s of its original HP, Special Attack and Special defence along with ⅓ of the stat whatever you use for a body, and the body provides ⅔ of the physical stats and ⅓ is given to it by the head. With this you can create some awesome combinations of typings, movesets and abilities. All you need is some DNA Splicers and some room on your team. A great concept for both casual players, who want to create some fun fusions or for hardcore battlers who want to create their perfect lifeforms. The sprite style is based on the Pokémon Fusion Generator website, so it consists of somewhat sloppily pasted headsprites and pallet swaps, but these combinations can be utterly hilarious. Would you rather prefer some decent sprites for your beloved creatures like me? No worries! The game has an amazingly healthy community on both Reddit and Discord where plenty of helpful people will help you obtain some amazing custom sprites, which are very easy to use. In terms of the game concept , I would even go as far as to say that there is no better game out there, this is the most unique yet still Pokémon feeling fangame I have played.