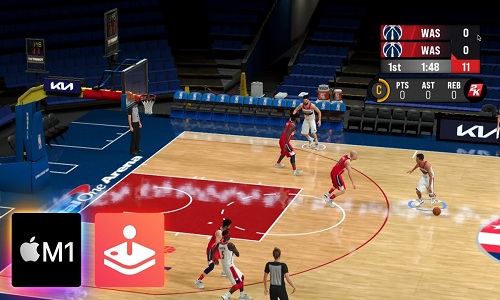 Realised to Apple Arcade & Android Platforms; NBA 2K23 Arcade Edition is the latest title in the world-renowned NBA 2K franchise. Exclusively on Apple Arcade, put your skills to the test in the all-new Greatest mode. Complete challenges and earn points to see who's really the greatest finisher, shooter, play-maker, or defenseman in the NBA. For the first time, you can go up against the 20 ""Greatest of All-Time"" NBA players from the 76th NBA season, like Devin Booker, Kevin Durant, and Luka Doncic, and NBA legends, such as Michael Jordan, Shaquille O'Neal, and Dirk Nowitzki.
Boost your on-court performance with TakeOver by performing GOAT basketball action on the court and filling your TakeOver meter. Choose across a wide variety of TakeOver boosts matching your play-style and upgrade it by playing to increase its effects and frequency.