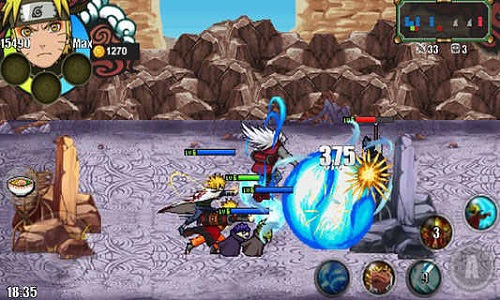 This time we will discuss Naruto games, one of which is Naruto Senki. Maybe my friend is new to this type of game. This game is not available on the Playstore. So it is very fortunate that my friend has visited this article. Before downloading it, it’s better for you to know about this game. Naruto Senki Review Naruto Senki is the name of an Android game with a ninja theme and the main character is Naruto of course. In general, the game system in this game looks like a MOBA game but is made with characters in the Naruto anime In this game, you have to beat your enemies with 3 available jutsu or skills and add 2 additional jutsu. If you want to win this game, besides having to beat the enemy, you also have to destroy 2 crystals and 1 main crystal. This game is almost the same as the Brawl mode in the Mobile Legends game but can be played offline with Naruto characters. Maybe you have a little difficulty playing this game, but you don’t need to worry because apart from the Naruto Senki beta which has the original type. The modified version or Mod with certain advantages. Therefore, we will provide several Naruto Senki mod games that can be an option according to your own interests. This Naruto Senki game can also be played very smoothly on smartphones with specifications that are not large or commonly called HP Potatoes. Because the file size of this game is also not too big, around 100 MB, even small, and can be played offline. Naruto Senki Mod Apk This game is a game that is quite famous and is often played by both old and new users. With game developers who are no longer actively updating the game, many modifiers are trying to make this game look new. Not only one person did it, but several people who made this game seemed to have many series.