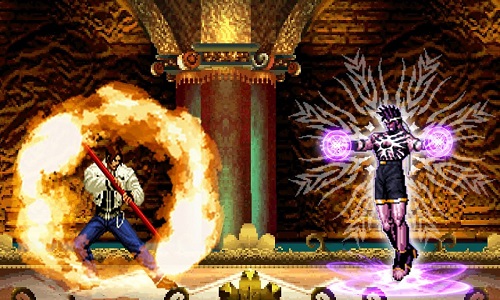 i have decided to be kind enough to review a character with 100% sticked on it. i would have reviewed your latest characters, but since they are still betas, that would be stupid. it's better to stab someone when he thinks he's finished 100% of the character. you'll soon see that accuracy & ironmugen don't fit together, unless you've already read the previous reviews published on ddm. if you visited ironmugen's website, you found out that he has converted (read : fucked up) many kof characters to mugen, such as kyo, orochi iori, terry, robert, andy etc ... but guess what? they all have common points. yes, sir. they all suck because they all contain the same mistakes. your laziness isn't appreciated in the mugen community, and here's a third review to prove it, attention whore. so far, here's what we have in iron robert :
- your sprites are not cropped : learn how to use sprmaker & sff2pcx, it's not hard to get an optimized sff file. wait, you've been in mugen since 2000, so you should know that by now. - clsns are totally un-accurate. debug dip 1-2, ctrl-p & psp can be useful sometimes. you were aware of that though. lazy ass.
- vels are totally off, the kof feeling is simply non-existent. i don't think you have a good understanding of the game. - rbs sparks & hitsounds don't fit at all in a kof character. dang even if it's your choice, 99.9 % of the users will want to insert kof/other sparks.
- totally wrong timings for basic cancels/non-basic cancels? this is not kof. do you ever play the game you're ripping from? i guess not.
- damage is freakin high!!! perform close hp, forward + lk, ryuko ranbu and you get a combo that does 500 damage. note that the single ryuko randu sdm takes 750 life. did you know you can measure the exact pixel count, using screenshots of the game? seems not, as this was already found in iron andy and later in iron terry (in fact, all the "kof" characters you converted, faggot). add to this the fact that juggle system is not working, and some crazy combos are open to you!! hooray~~
- voice samples and some anims have wrong timings, use dip 2-5 and your ability to count down game ticks, assuming you can count, of course. geez it's so easy to get accurate data from kof games.
- the '95 portraits suck. we are in 2003, you should have included kof'99-2000 ones as alternates.
i quickly came to the conclusion that we have an sff from a kof character who doesn't feel, play, look and sound like he did in the real game. so that's your definition of accuracy, eh? need glasses, ironmugen? with 3 characters reviewed by ddm, your unpopularity is rising fast. let's hope you'll stop releasing shit, so we can be happy. you shouldn't be proud of releasing 16+ characters that are not even worthy as punching bags. end of discussion.