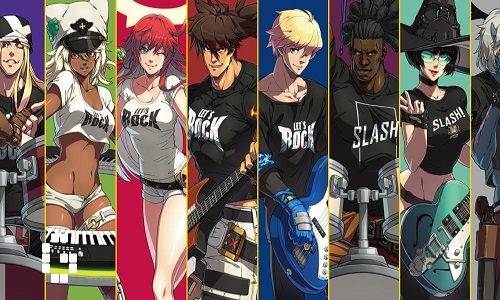 Guilty Gear Strive[a] is a fighting video game developed and published by Arc System Works. It is the seventh mainline installment of the Guilty Gear series, and the 25th overall. The game was released worldwide on June 11, 2021 to generally positive reviews.
The story continues after the events of Guilty Gear Xrd.[3] It is the conclusion of Sol Badguy's story (A.K.A. The Gear Hunters Saga), set in Washington, D.C., United States of America and featuring his final confrontation with That Man, Asuka R. Kreutz. Three weeks after the events of Guilty Gear Xrd, I-No frees the powerful magic-user Happy Chaos from the body of former Sanctus Populi, Ariels, who is imprisoned inside a special holding cell in Illyria. Chaos notes that she is physically incapable of feeling desire, then offers to help her find her “other half” so he can enjoy some drama. Asuka turns himself in to the US president Colin Vernon E. Groubitz, intending to join the White House's G4 peace summit from a holding cell and ask the other nations for assistance in ridding the world of the Tome of Origin and Sol Badguy. The world's leaders fear an attack from I-No and hire knights from each country, including Sol Badguy, now the world's renowned Gear hero who remains a bounty hunter. Sol and his second lover, Jack-O', plan to refuse, but accept after noting Ariels' warning about I-No and Chaos' plot. After releasing and brainwashing the samurai, Nagoriyuki at an Illyrian town, I-No dares Axl Low to erase her, then surrenders herself to the Illyria police, convincing the world that it is safe to hold the summit. However, Sol and Jack-O notice something wrong and chase Chaos, assisted by Chipp Zanuff and Anji Mito, but are stopped by Nagoriyuki and Chaos' eerie nature, but also that Chaos created weapons from materials from Nagorriyuki's blade which can kill Gears and other immortals beings. During an interrogation, I-No says she remembers a kind blonde man but thinks the memory never happened and asks if Jack-O' will ever find her "place" in the world. In private, Jack-O' reveals to Sol and Ky Kiske that I-No is "incomplete" and needs to join with her other half to achieve godhood. She suggests sacrificing herself to turn I-No into a regular human, but Sol refuses to entertain the thought.