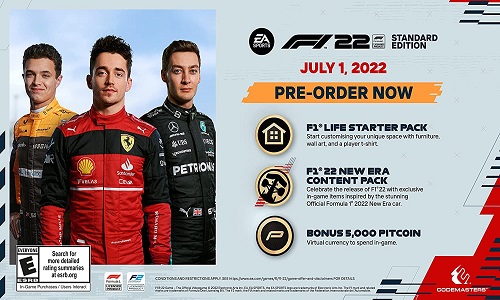 It’s a new era for the world of Formula 1, with some of the biggest changes seen in the sport in four decades shaking up not only the status quo, but also the spines of the drivers as teams wrestle to rein in the engineering quirks of this year’s new cars. Codemasters has followed suit with F1 22, stopping short of infusing this season’s back-busting porpoising phenomenon into its handling model but tinkering just enough with its reliably robust annual racer that it does feel sufficiently refreshed in a number of the right areas – even if the overall package is bound to be a pretty familiar one to returning fans.Rest assured, there is more to F1 22 than simply a stable of the latest cars and the new Miami circuit. Visually it’s treading water this year but small touches, like neat new post-race clips of the battle-worn cars and updated camera angles on the old podium celebrations, slightly rejuvenate parts of the Codemasters F1 series that have been stagnant for many years. The new race engineer voice and the ability to switch out commentator David Croft for Alex Jacques similarly help set F1 22 apart from the previous F1 games, which have been feeling increasingly recycled in this department. A new adaptive AI mode joins the standard and already huge list of driver aids and accessibility options, and seems to keep the pack within striking distance of less-experienced racers. This should make for more exciting racing regardless of skill. I watched my eight-year-old duke it out with the adaptive AI and while I can’t quite observe the full difference between the two available levels of it, it did seem to keep him in the hunt without making the AI rollover entirely.