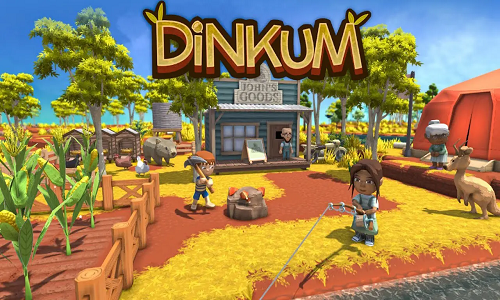 G’Day! Get ready to start a new fair Dinkum life and build your new home out in the bush. Explore tropical eucalyptus forests, scorching deserts and cool billabongs on an Island inspired by the wild Australian outback. Take care of giant wombats, play with friends and get ready for a ripper time!
Dinkum, from solo developer James Bendon, is clearly crafted with a lot of love for the life simulator genre. In the space left by Animal Crossing: New Horizons, it fills a void with more of the same, but clever tweaks to the classic formula make each choice feel meaty, and each quest feel meaningful. That said, the game isn’t without its quirks – and setting it in a fantasy version of Australia comes with plenty of baggage that goes unaddressed.
To kick off this review, it’s pertinent to point out that while Dinkum is inspired by Australian flora, fauna and colloquialisms, it does not represent Indigenous Australia at all. As Bendon made clear on Twitter, he does not identify as an Indigenous Australian, and cited that as the reason he chose not to include elements of Indigenous culture in the game.