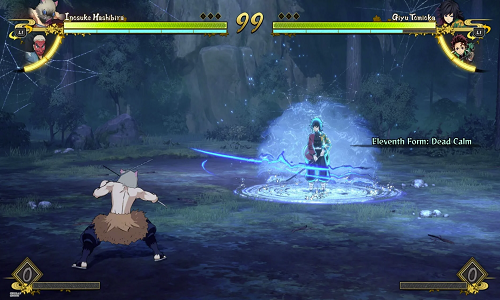 Demon Slayer: Kimetsu no Yaiba – The Hinokami Chronicles[a] is a 3D fighting, action-adventure game developed by CyberConnect2. Based on the 2019 anime adaptation of Koyoharu Gotouge's manga series, Demon Slayer: Kimetsu no Yaiba, the game was released by Aniplex in Japan, and globally by Sega, for Microsoft Windows, PlayStation 4, PlayStation 5, Xbox One and Xbox Series X/S in October 2021. It also was released for Nintendo Switch in June 2022.Adapted from the events of the first season of the anime series, along with Demon Slayer: Kimetsu no Yaiba the Movie: Mugen Train, the game's single player story mode follows Tanjiro Kamado, the series' protagonist, as he joins the Demon Slayer Corps and faces off against various demons in order to turn his sister Nezuko, who has become a demon, back into a human. The story features some exploration elements, and is told through various cutscenes and boss battles with demons seen in the anime series.[3] The Hinokami Chronicles also features a versus mode, where players form teams of two fighters from the roster and battle CPU opponents or other people. The game supports both local and online multiplayer.[3]